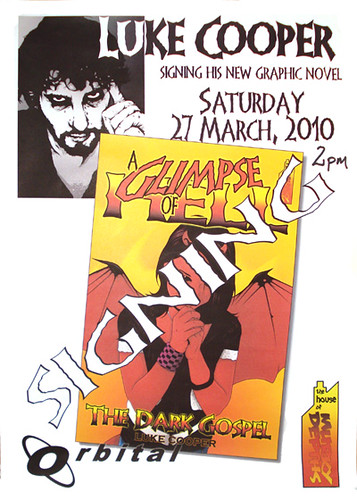 Coinciding with the last day of Nancy Farmer’s exhibition, Sunday 27th March, author / artist Luke Cooper appeared at Orbital Comics, to sign copies of his graphic novel “A Glimpse Of Hell – The Dark Gospel”, containing stories published in Murky Depths, Portent Comics, and some previously unpublished material; “a brutal blend of crime and horror with ballistic action, buckets of gore and a dark sense of humour” is promised. Though temperamentally very different, Nancy Farmer’s and Luke Cooper’s work has much subject matter in common: demons and angels trail though many a picture and we often meet the unfamiliar in a familiar setting. A wine bar populated by demons is a common enough problem to both artists, it seems.